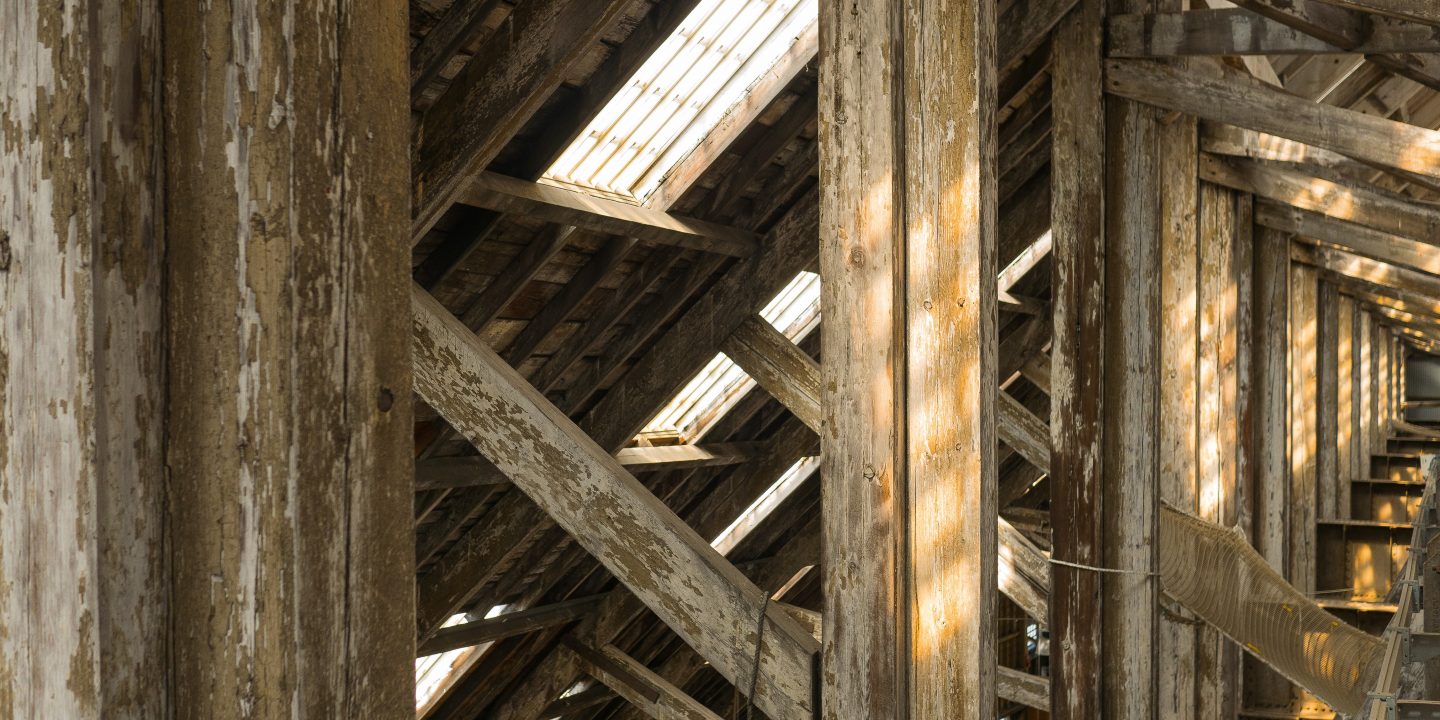 For small elements, we can assume the pane stress equilibrium applies:

We know that the stresses along a beam can vary, and so if we look at a larger element, there must be a stress gradient. Performing an equilibrium of forces on these stresses, and the body force

leads us to the stress equilibrium equations:

We know that from the notes sheet on beam theory that at any section throughout the beam:

Substituting this into the stress equilibrium equations above gives:

is the shear force ating on the cross-section:

) gives us the shear stress distribution throughout the section:

The maximum shear stress occurs at the neutral axis,

Shear stresses are much smaller than axial stresses, and are only really important in short, stubby beams. For a cantilever, this is when L = ¼D.

Also known as rolled steel joists (RSJs), these are by far the most common form of steel beams because of their immense rigidity – weight ratio. The shear force distribution is as follows:

The shear stress distribution is discontinuous, due to the varying cross-section. The maximum still occurs at the neutral axis:

Meanwhie the maximum direct stress is:

The second moment of area is given as:

Often, you see I-beams with cut outs in the flange. This reduces the weight significantly without affecting its strength (because shear stresses are so much lower than direct stresses):

The beam on the right has a segnificantly higeher second moment of area but weights the same (if not less) than the beam on the left.

When a beam is bent beyond its yield point, plastic deformation occurs. In real life, the stress continues to increase beyond this point through work hardening, but for this analysis we will model materials as elastic-perfectly plastic:

This folllows the standard stress law that we know and love:

If there is also an axial stress applied, the line is simply shifted o the left or right by its magnitude. For a rectangular beam width

, the stress distribution then is:

If the stress in the beam reaches the yield stress,

, a plastic region forms around an elastic core:

As the stress increases, the elastic core shrinks until the entire cross-section has deformed plastically and permanently.

, at the top and bottom is given as:

, represents the safety margin between initial yielding (when plastic deformation begins at the top and bottom) and total failure (when the deformation is fully plastic):

When the load on a beam is concentrated at a singular point, the greatest plastic bending moment occurs here. Often, the beam will not just snap immediately, however, and there will be a region of decreasing plastic deformation on either side of it.

This is called a plastic hinge.

When a beam has been loaded beyond yield, the permanent plastic stresses remain in the beam even if it is fully unloaded. These stresses are called residual stresses.

In a beam that deforms plastically but does not bend, the plastic stress is locked in as a constant throughout the cross-section.

If the beams bends plastically and is then unloaded elastically, a more complicated residual stress
distribution is left behind:

Struts are compressive beams that support a greater structure. Buckling can cause instability and failure at loads significantly lower than the yield stress in the material.

The principle of buckling can be thought of in terms of elastic behaviour, where the struts bend under compression:

The ccritical load for buckling, then, is:

is the number of constraints. The central deflection,

, is given as a sinusoidal function.

is a constant to be determined:

The example on the left experiences convex bending at the top and bottom, and concave bending in the central section (of length

. The critical load is:

The example on the right can be treated as a pin joint of twice its length:

Stresses in a Loaded Strut

The total axial stresses in a loaded strut are the sum of the applied load and those due to bending: