In electronics, signals are constantly being recorded, processed and given out. These can be analogue or digital with sinusoidal & geometric waveforms respectively. Either way, it is important to understand the waves and be familiar with reading them.

Mains electricity is delivered as an alternating current at 50 Hz. This can be represented on sine
and cosine waves:

To convert between rad/s and rpm:

Two sinusoidal waves can be in phase if they overlap, or out of phase if they are the same, but
slightly offset in time. This time is called the phase lead or phase difference,

The actual average of a sine wave is zero, but this is not helpful. Therefore, the root mean square
is used to find an effective average of sinusoidal graphs:

The effective voltage for a sine wave is given by:

An analogue signal can be approximated digitally using square waveforms.

The average value of a periodic waveform like the ones above can be found by integrating and dividing by the time period:

The amplitude of the waveform is the distance between the maximum and average values:

This is not necessarily the distance from the x-axis.

Often, we want to regulate the power output of a circuit. This can be done by varying the current, voltage or resistance:

However, for a square waveform, it can also be done by varying the time the wave is on for in each cycle:

We can calculate the root mean square voltage and current for a square wave form:

To better approximate and analogue signal, a piecewise waveform can be used instead of a square waveform:

This is a square wave with varying amplitudes for

fixed intervals. The root mean square voltage is found using the sum of all the intermediate voltages squared: 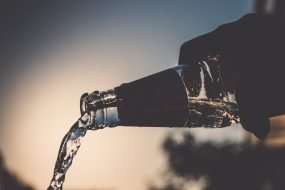